Terry and I always have difficulty getting each other gifts for Christmas. We often end up buying something for ourselves - and calling it a "gift" ...

Friends of ours - parents to two teenagers - never buy each other Christmas gifts: We are our gift to each other, they say...

I can understand where they are coming from. I mean - giving yourself to someone in marriage is one of the biggest gifts you can ever give! But when I mentioned this concept to my kids, they were quite indignant.

You and dad have to give each other a Christmas gift, they insisted. So we make an effort to do so - if only to please them.

This year I did come across a gift idea for Terry which was a surprise (a GPS)... And we found an interesting gift for me while shopping in a nearby mall.

At Christmas, there are often stands in the mall - and I came across one that sold silver jewelry. I went over to take a look...

Is that a puzzle ring? I asked the vendor, pointing to a ring that seemed to be made up of several thin silver bands.

No, it isn't, but I do have a puzzle ring, he replied.

Then, to my surprise, he pulled out the exact ring I was looking for...

Let me explain: When I was a university student, I had a puzzle ring - four rings intertwined that fold into a single braided design ... if put together just right. In fact, I still have it, but it no longer fits. So a few years ago, I began to hunt for a replacement in a larger size. I looked on the internet, in jewelry shops in Ottawa and elsewhere - wherever I thought unusual rings might be sold. My original one was made in Turkey... Was it possible that the jeweler who invented them had retired and those ingenious little rings were no longer being made?!

I had almost given up hope of finding it... And now, here it was!

I pulled out my wallet and paid for it.

What did you buy? Terry asked...

Your gift to me for Christmas! 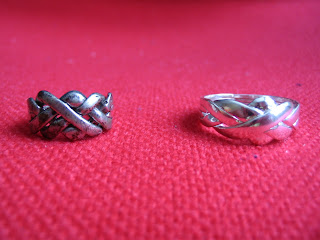 So here it is - together with my old tarnished one on the left. 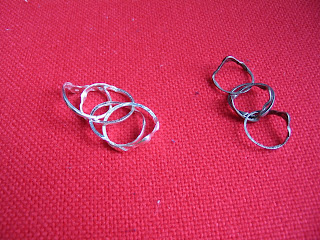 If you drop them, they come apart like this. 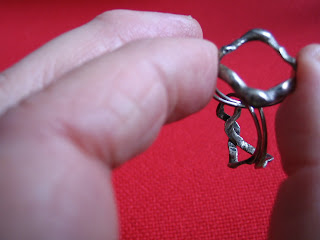 To put them together you put the V-shapes together first. 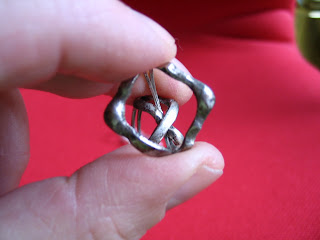 Then you fit the other 2 bands into a figure 8 - but the top V shaped bands have to be inside the figure 8.

Then you turn the top bands into the figure 8, starting with the bottom one (the one with 2 indents... In this picture it's on the right...)

This YouTube video also shows how to do it...

Posted by Marlene Hutchins at 10:49 AM