My daughter recently moved into a new - open concept - apartment. To make her new home look uncluttered, she has had to get rid of a lot of things that she was holding on to - in case she ever needed them...

It has been very liberating, she told me. I feel great whenever I take out another recycling bin of paper. Or whenever I give away furniture I no longer want. Slowly the place is looking the way I want it to - uncluttered! 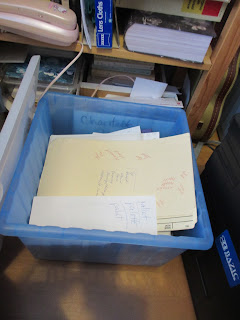 I think of her enthusiasm for de-cluttering as I survey the boxes of papers (remnants of my teaching days) that clutter my study.

Will I feel as happy if I recycle these? Do I want to sort through them ever again? What if I decide to create more teaching material (a highly unlikely possibility!)? 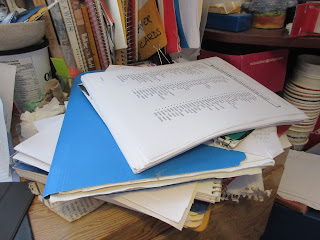 So much time has gone into these papers... it's hard to just toss them...

But maybe that's what I really need to do!
Posted by Marlene Hutchins at 6:00 AM No comments: Links to this post

One Good Thing About Winter...

I'm not a winter person. I don't ski or skate. I'd be perfectly happy in a snow-less environment. 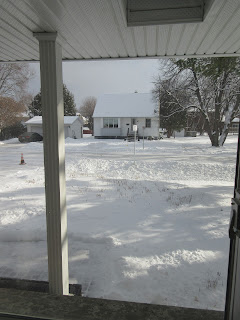 Winter keeps me indoors much of the time...

When I'm indoors, I'm often motivated to go through things, getting rid of what I no longer need.

That's what I've been doing for the past few days.

If today were sunny and warm, I'd want to head outdoors. But not today... 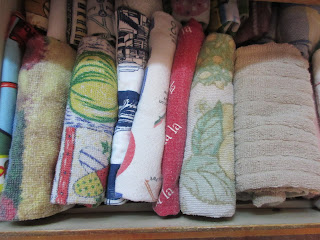 A year ago, I read Marie Kondo's two books on tidying up. She calls it a joy. I found her books very helpful... I love her system of folding and organizing drawers...

I've managed to keep this tea towel drawer tidy for the past year with no effort at all. 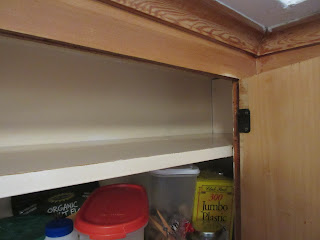 Last year I worked on closets and drawers; this winter I've been motivated to go through all my kitchen cupboards.

First I clear them... 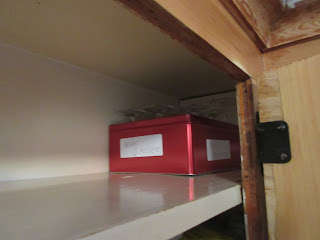 Then I look for boxes, bins and baskets to put things in. 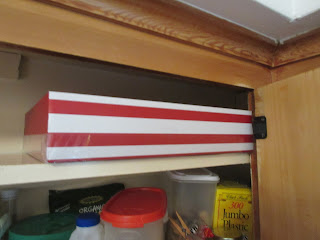 Sometimes a great box simply doesn't fit into the space allotted...That's disappointing... "Back to the drawing board!"

Marie Kondo stresses not having more than one stash of the same item in different places...

It takes time to figure things out. But I'm hoping that, if winter lingers, I may actually get the whole kitchen done. That would be nice!
Posted by Marlene Hutchins at 6:00 AM No comments: Links to this post

Union Station in Toronto, where I catch the train to Ottawa, has been undergoing major renovations for the past few years... (Yes, YEARS!) Every time I go there, things are different. 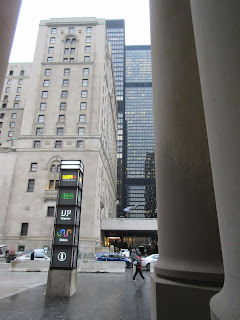 But on my last visit, there seemed to be less construction...

I was an hour early. Maybe I could explore a bit without getting lost (and missing my train)! 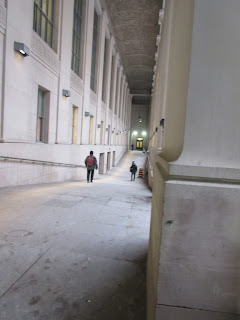 I wandered around, trying to figure out where the new food court was from the waiting area in the large hall... Checking my google map app - I saw it was only a two-minute walk from where I was!

Two minutes?! But where?!

I asked a train employee - who pointed to two doors nearby: Go through those doors and turn right...

I did - and found myself in an area where commuter train tickets are sold... and also food... 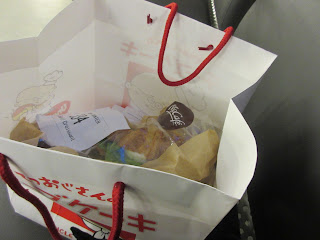 A bake shop selling Uncle Tetsu's Japanese cheese cake was only a few steps away. Perfect!

I purchased one and headed back, with time to spare!

Glad I took the time to explore!
Posted by Marlene Hutchins at 6:00 AM No comments: Links to this post

I recently headed to Toronto for a few days... 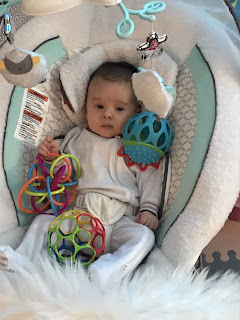 I was excited for an opportunity to spend time with my grandchildren: the baby I had last seen when he was only a few days old and his three-year-old sister. 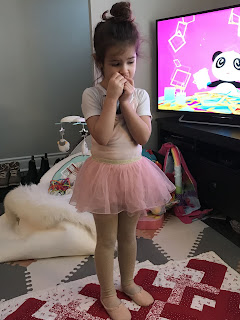 I spent time reading and doing Play Doh with my granddaughter who - inspired by the children’s TV program with “Emma Wiggles” - loves ballet.

Here she is, planning her next choreographed moves... 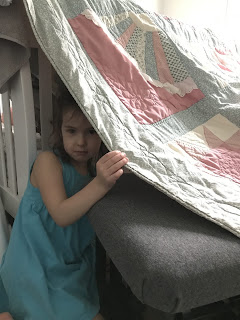 I brought along the book on how to babysit a grandma - which we read together several times - trying to do as many of the suggested activities as possible, including making indoor tents. This creation was our play space for two days. It had two "bedrooms" where we could talk to each other through a "window" - i.e., the legs of a stool. I did a lot of crawling around - which I consider good physiotherapy!

It was a lot of fun!
Posted by Marlene Hutchins at 6:00 AM No comments: Links to this post

Winter is Half Over!

Yesterday marked the half-way point in Terry's "100 Days of Winter"... (He calculates December 1 as the first day of winter and March 10 as the last. These two dates have an average daytime temperature of 0 degrees Celcius / 32 degrees Fahrenheit). 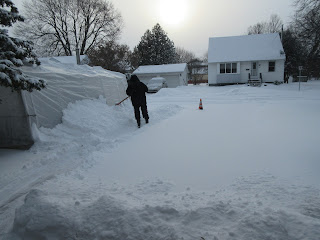 Terry spent much of the morning clearing snow from our driveway - a job made harder by his careful attention to detail.

I offered to help, but I wasn't meticulous enough!

My approach is this, I told him: Decide what is most important ... If I could only do half an hour of snow removal, what should I focus on...? His approach is to do it perfectly: Move the chairs off the front deck and don't forget to sweep away the snow that's under the chairs...

But the sun will get that, I protested...

He didn't complain when I didn't do it his way - but it's hard to work with someone who has higher standards than you have!

No wonder you are discouraged every time it snows, I told him. It frustrates you that your carefully manicured driveway is covered with more snow and you have to start over again...

He agreed - but I think he's stuck in his ways - just as I am stuck in mine!
Posted by Marlene Hutchins at 6:00 AM No comments: Links to this post

Terry and I were shopping in an antique furniture store with my daughter... 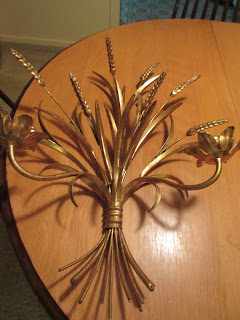 As we wandered around, I couldn't help but admire some metal candelabras on the wall...

I love them! I told my daughter... Not that we need anything...

But on Christmas Day there was one under the tree for me!

(Now to figure out where to hang it!)
Posted by Marlene Hutchins at 6:00 AM No comments: Links to this post

I've been eating vegetarian for three months now - in hopes of lowering my blood sugar naturally. Eating vegetarian (no meat) and especially vegan (no animal products at all, like milk, eggs, jello made from animal bones, etc.) has been shown by some studies to improve the glucose management of some type 2 diabetics.

It isn't easy being vegetarian when you live with someone who loves meat! But Terry is trying to be supportive - he does go to a vegetarian restaurant with me once a week. The rest of the time, when we cook, I eat only vegetables and he eats them with meat.

I eat a lot of hummus (which is bean based) as well as homemade bean and vegetable soup. I often have oatmeal for breakfast. I eat yogurt and other milk products, though I've experimented in avoiding them for a few days here and there - to see if that makes a difference...

The bad news is that my blood sugar levels haven't nose-dived. They remain quite high. That said, I  also stopped taking my diabetes medication (with the knowledge of my doctor) because I was losing strength and having difficulty walking, a rare but documented negative side effect.

When I read (and re-read) the reports of the vegetarian studies, I find myself in them... I'm among "those who don't lower their blood sugar"...  another documented group.

Apparently some of those have improved their blood pressure and other signs of good health. My next appointment with my diabetes specialist in late February should show me if I'm among this group.

In the meantime, I've had one positive result... I've lost a few pounds. If that trend continues, maybe an improvement in my blood sugar will follow. It sometimes does.
Posted by Marlene Hutchins at 6:00 AM No comments: Links to this post